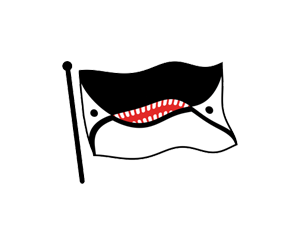 In the year of our lord two-thousand and nineteen, the Stranger challenged the citizens of Seattle to design a new city flag. No longer content to be represented by a hurly burly spermatozoa, the entries poured in. While nine much more sensible designs made the final cut, it was the gap-toothed little under dog that captured the hearts and minds of the people. The Orca Face won the popular vote by a landslide but was thrown out due to some dullard stuffing the survey box.

The killer whale or orca (Orcinus orca) is a toothed whale belonging to the oceanic dolphin family, of which it is the largest member. Just like Seattle.

Unlike Seattle, the orca is highly social. And joyful. And maybe folks have been flocking to the Orca Flag not because of who Seattle is, but who Seattle wants to be. Not a sensible but aloof gemstone sandwiched between a ketchup river and a mayonnaise field, but a fat, happy marine mammal that spends all day eating salmon, singing, and doing rowdy barrel rolls. With the Orca flying overhead, we’re reminded to work a little less and HIGH PITCHED SQUEAL a little more.